I often get questions about using Adobe Flash (from here on, Flash) on a website. I do not encourage the use of Flash.

Flash is proprietary (controlled by one company). Flash needs to be installed as a browser plugin to have the content it is publishing accessible. Flash is resource-intensive (slow, depletes your mobile computer battery more quickly). Flash does not produce accessible content (for example, you can’t easily copy and paste text — and the browser's back button is broken unless time is dedicated to make it work again — two of many deficiencies). Flash has many security issues (which can only be fixed by one company). Flash will disappear in the next few years as it does not run on mobile devices such as the iPad.

Instead of Flash, I recommend HTML, CSS and JavaScript (especially using the jQuery framework), free, open technologies which let you create accessible content based on open standards that won’t lock you into a proprietary platform, more quickly, for less money. 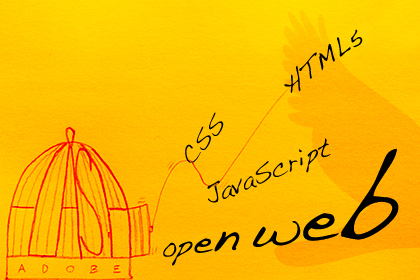 HTML, CSS and JavaScript are the language of the web, and will always, in our and at least the next generation’s lifetimes, count.

The idea of HTML et al is a document markup language that would grow. Its architects saw we were going digital and sat back and took a long view. A very long view. They laid the foundations for a language that would work with all the conceivable technology of the time, and would be expandable to the unconceivable technology that would follow. So that documents would never be unretrievable due to age. Ever. A browser in 2050 would be able to read a 1994 document. And in 2094. And so on. They made a stand of cultural importance to the world.

For comparison, imagine if there were no archives, no libraries, no museums, no records kept. The only available cultural items are what’s available in stores: you can only get what’s “in print”, and it will expire when the next edition comes along. That’s where we were headed by tying data to proprietary technologies.

Not using Flash doesn’t only make your website better, it makes the whole web better. The next time someone tries to convince you to develop a website or website feature using a proprietary plugin technology such as Adobe Flash, beware!