International Symbol for an Observer

Tl;dr: I couldn’t find an international symbol for an observer that was mentioned in an astronomy lecture, so I made one, dedicated it to the public domain and submitted it to the Unicode Consortium. This page details the rationale for my submission including files and usage examples.

While there are many symbols for astronomical bodies and atmospheric phenomena in the Unicode Standard, there is none for an observer of these. A symbol for an observer can be useful in illustrating scientific discussions.

An international symbol for an observer was mentioned and drawn (image above) by Charles Bailyn in ASTR-160: Frontiers and Controversies in Astrophysics Lecture 2 - Planetary Orbits. I went looking for it on Codepoints.net, a site dedicated to all the characters defined in the Unicode Standard, and in Unicode’s own Miscellaneous Symbols and Pictographs chart (PDF, 830kb). My search has been unsuccessful as it seems there is currently no unicode symbol for an observer.

While a symbol for an eye 👁, also known as sight, does exist (U+1F441 EYE — I do not have a font in my system that displays it), I believe it is still worthwhile to have a specific symbol for an observer because the existing eye depicted in a frontal view is more representative of the organ’s anatomy rather than the act of observation, which is better represented by a profile view of an eye indicating a direction.

Examples of Existing Glyphs an Observer Symbol Would Complement

Below is a symbol for an observer I made, dedicated to the Public Domain. Files in AI, EPS, PDF, PNG, PSD, SVG and TrueType and other font formats in a ZIP archive are available for download here. In the embedded font, the version looking right is typed using a lowercase ‘o’ and the version looking left using an uppercase ‘O’:

Here’s a PNG in case the font doesn’t load: 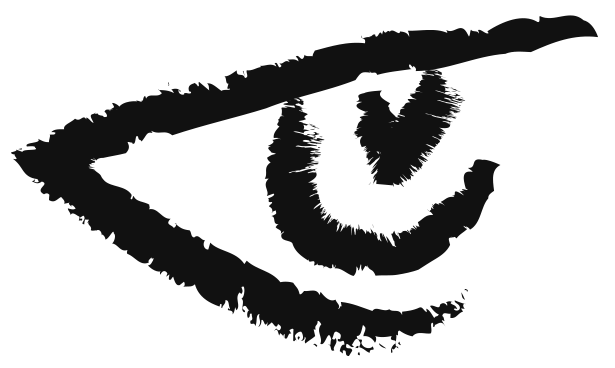 Observing a star and a cat:

I really like this symbol. Thank you. I appreciate its original purpose, but I used it as my terminal prompt until macOS stopped rendering it when I upgraded to macOS 11. I just found the Symbola font which renders the symbol well. I got that font here: https://dn-works.com/ufas/ — Now I have my favorite prompt back.