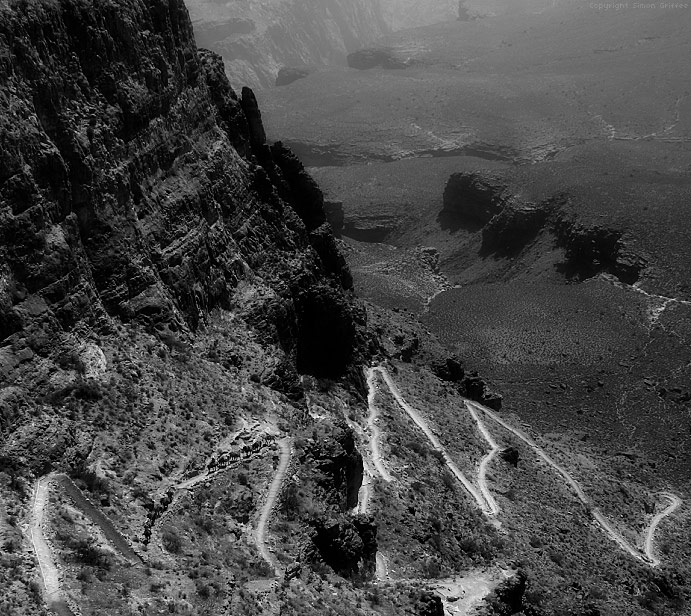 The sun was hot, the path was long, steep, craggy and dusty. A time to drink lots of water and also eat lots of junk food to prevent hyponatremia (Grand Canyon national park summer hiking guide.). 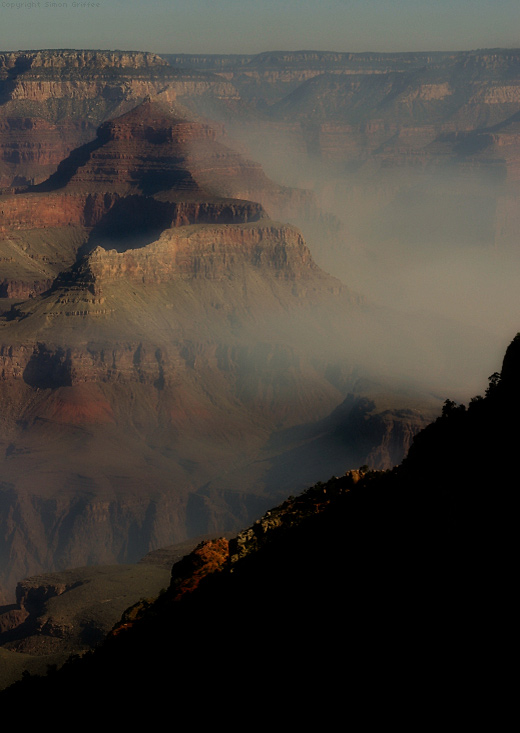 Early morning, and a breath-taking six hour hike ahead, down to Bright Angel campground across the Colorado river in the bottom of the Canyon.

Every shade of red and green and yellow, bright, dark, all in between; a landscape filled with a life all its own. The ‘fog’ was smoke from a natural fire on the North rim. 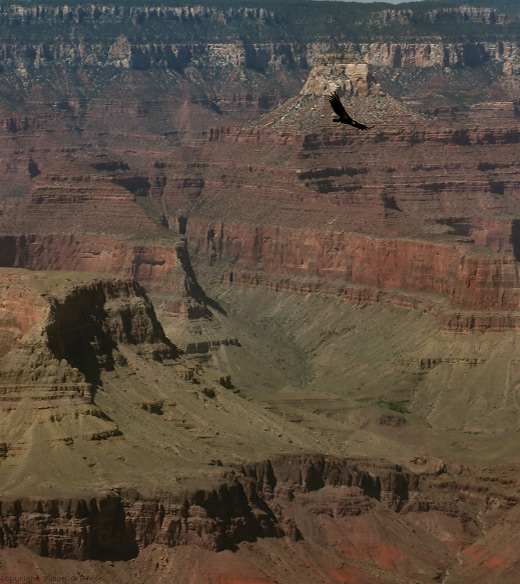 These condors had wingspans of over three meters, and the canyon is truly epic in scale, difficult to portray in photographs.

Off to Joshua Tree

There will be no updates the next few days because I will be at Joshua Tree national park (A desert park.) attending Per Volquartz’s workshop (Master photographer and printer.). I’ll be back next Tuesday, with lots of new photographs!

I had the pleasure of discovering the Digital Journalist (Monthly online magazine for visual journalism.) through Behind the Lens (George Barr.). Some highlights I’ve enjoyed: 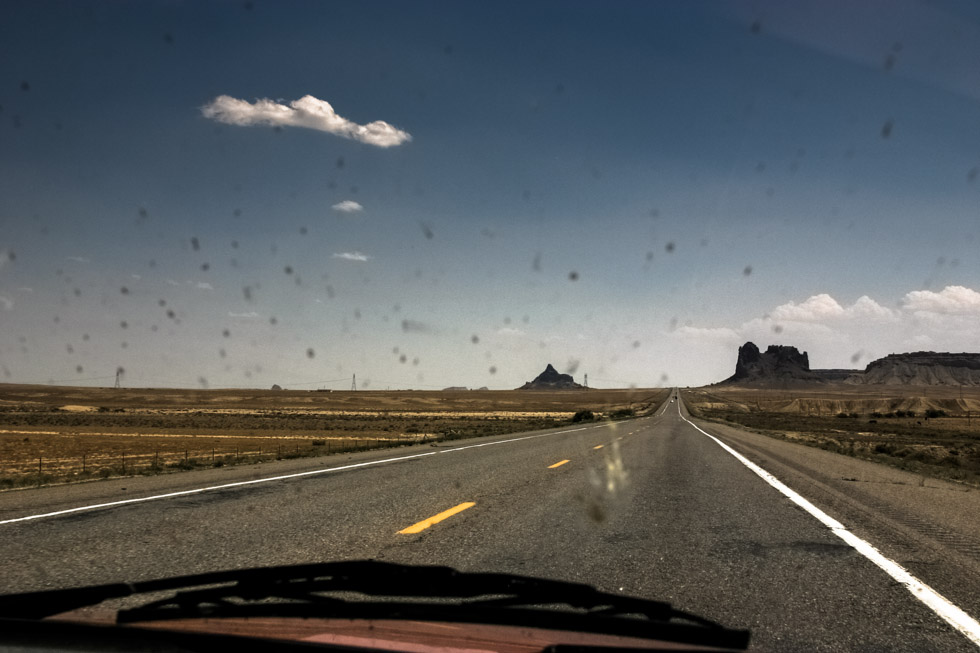 A wrong turn can have dramatic results in Navajo Nation. Ours cost us 400 miles, but eventually blessed us with shelter from 4th of July at Tsegi (Canyon de Chelly.).

Traveling in Diné (Wikipedia - Navajo Nation.) gave me the same feelings as when in any native american reservation: of poverty, an emptiness, a deep sadness, despite the grand vistas.

The native american way of life was destroyed quickly by the Europeans in their civilized ways, and the people of the land were all but forgotten, left with alcohol, fast food franchises, casinos and scattered ‘national’ monuments.

Fortunately, the people are resilient, and they will find their way back. I will not forget to send you your photograph once I begin printing, Harold. (Sent!) 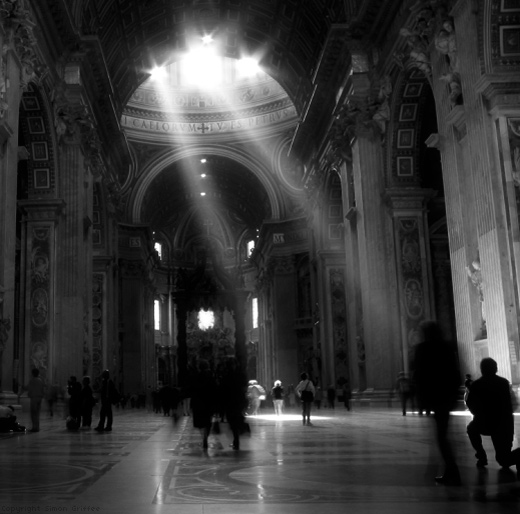 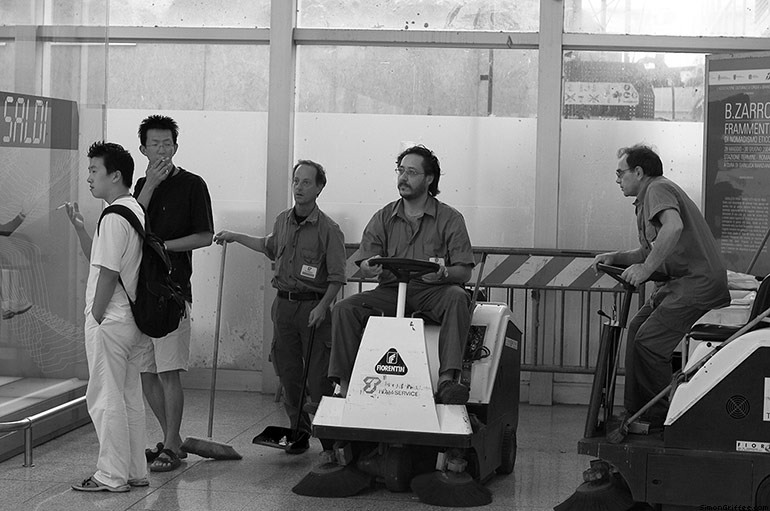 Mischevious tourists at Termini central train station. You can see a cigarette butt about to be gobbled by the cleaning cart. I don’t know what they were all looking at, probably an Italiana! 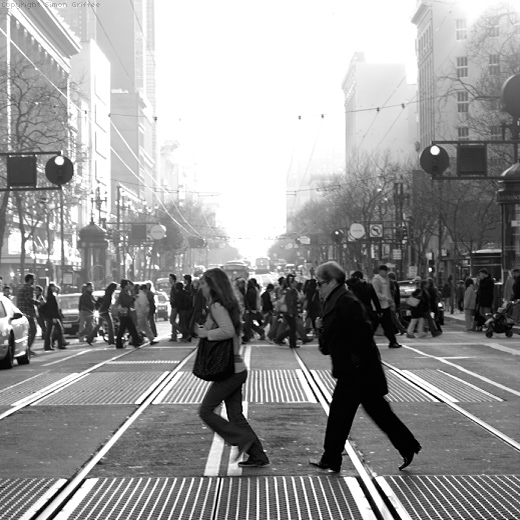 Young, old, in cars, in strollers. As Buddy Guy says, everybody’s in a hurry, and there ain’t nobody going nowhere.

I discovered that this camera was the technical means in photography, of communicating what the world looks like in a state of heightened awareness, and it’s that awareness of really looking at the everyday world with clear and focused attention that I’m interested in.

I don’t forget all that other stuff, but I don’t think about it. You walk down the street and you, when you were eleven months old, that was, figuring out how to walk was the main focus of your attention, and now you walk, you do fine, and you don’t have to think about it, now you can think about where you’re going. And I think that’s sort of a similar thing, I’m thinking about where I’m going with a picture. — Stephen Shore (Wikipedia - Stephen Shore.) 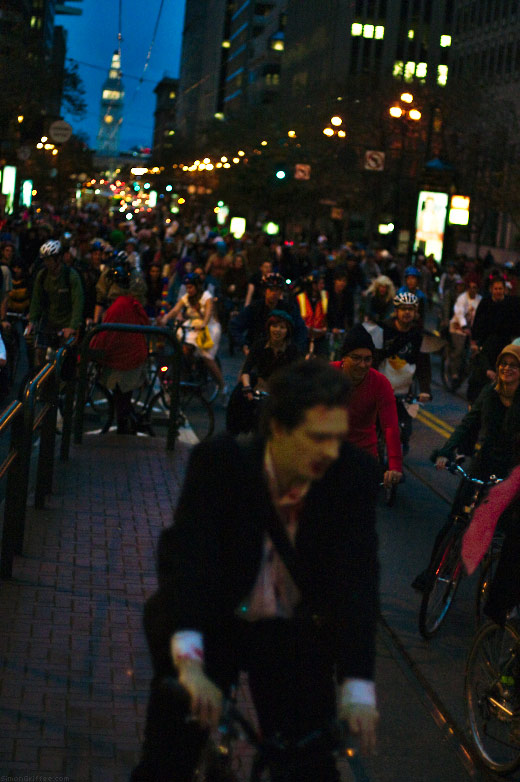 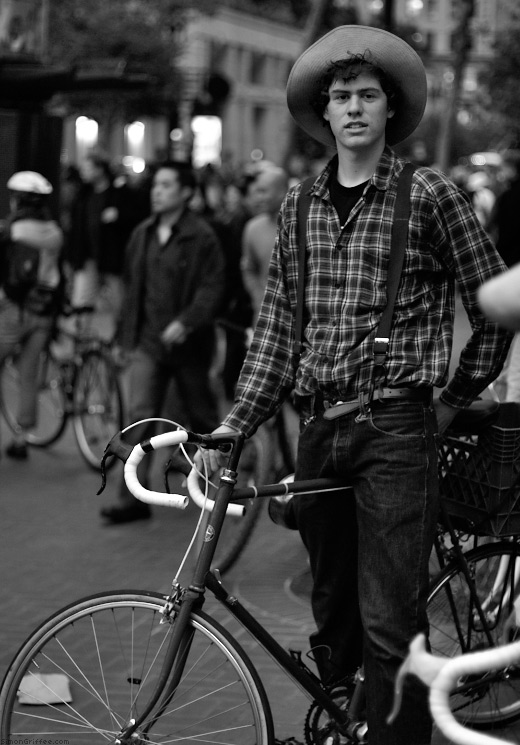 A rider inspired by the countryside gets ready to rock n’ ride in Critical Mass (Critical Mass on Halloween photograph.). 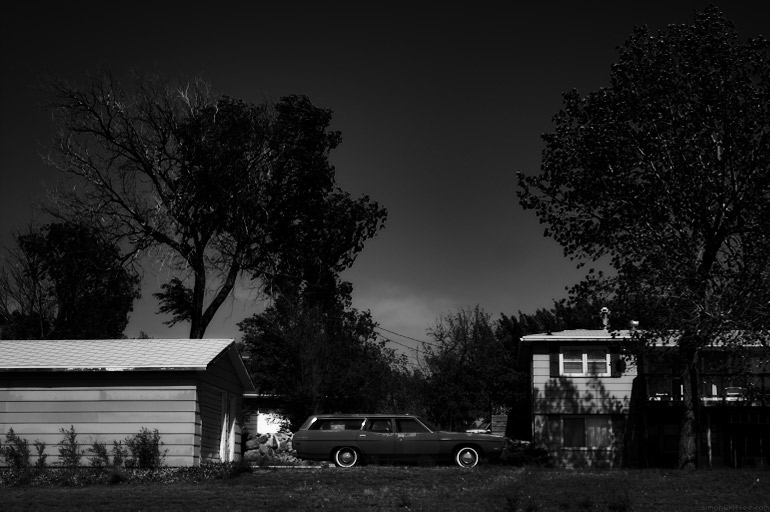 You need a car to get anywhere in most places of the United States, and you don’t need to get out of your car to get (fast) food, beer and liquor[1], or even to go to the bank. For these, you may remain in your vehicle and go through the drive-through.

The dependence on automobiles and the associated ‘conveniences’ are both astonishing and depressing to me. The strip malls and parking lots and gas stations and ‘business exits’ everywhere, built solely for the passing driver, near nothing, far away from everything.

Car, captured during my cross-country drive from Michigan to California, reminds me of all the above—hence the oily black and white treatment.

I am guilty of driving in this land of course, but only on distant travels with friends. The rest of the time, I ride my bicycle, and I love it. I should post a photograph from a Critical Mass (Critical-mass.org) in San Francisco…

[1] Don’t open these inside your car, and if you are walking, likely because you are in a city, keep them in a paper bag. 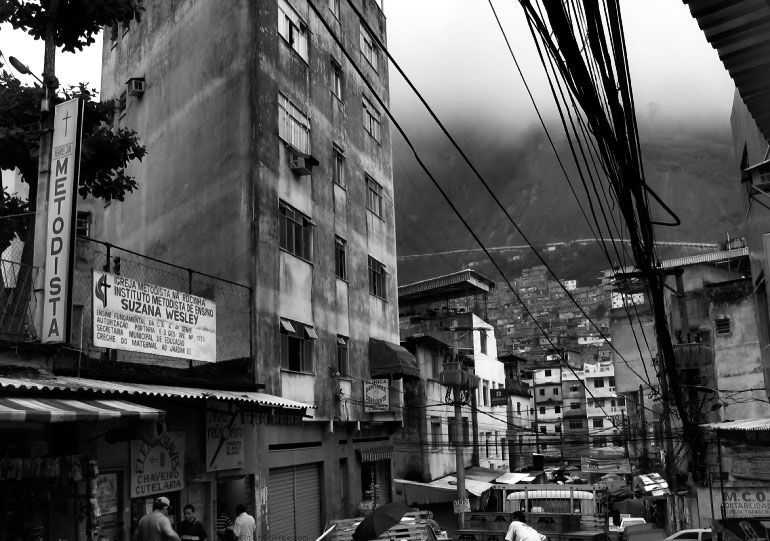 View from inside Rocinha (Wikipedia - Rocinha.), the largest favela (Shanty town.) in South America. It is not difficult or dangerous to visit Rocinha (Google search: tourists visit rocinha.). 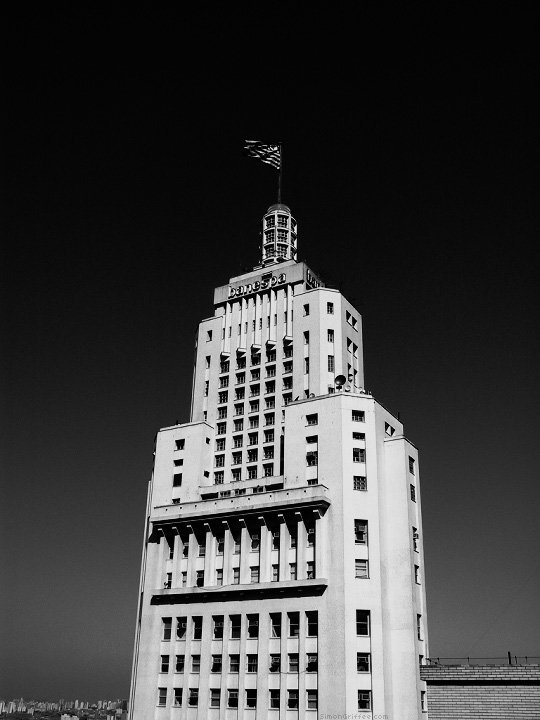 Banco Banespa’s building towers over the metropolis. The financial institutions usually get the top floors, and in Brazil it’s no different. A country of extreme contrasts, the very rich, and the very poor. In Rio de Janeiro, it is the very poor who have the best views in the city, topographically speaking. A photograph of Rocinha (Wikipedia - Favela Rocinha.) is next. 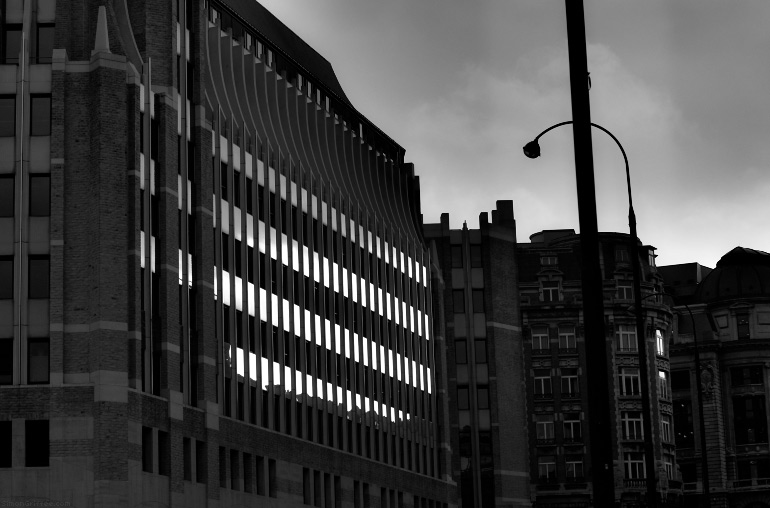 Far away, the sun ducks beneath the thick cloud carpet. 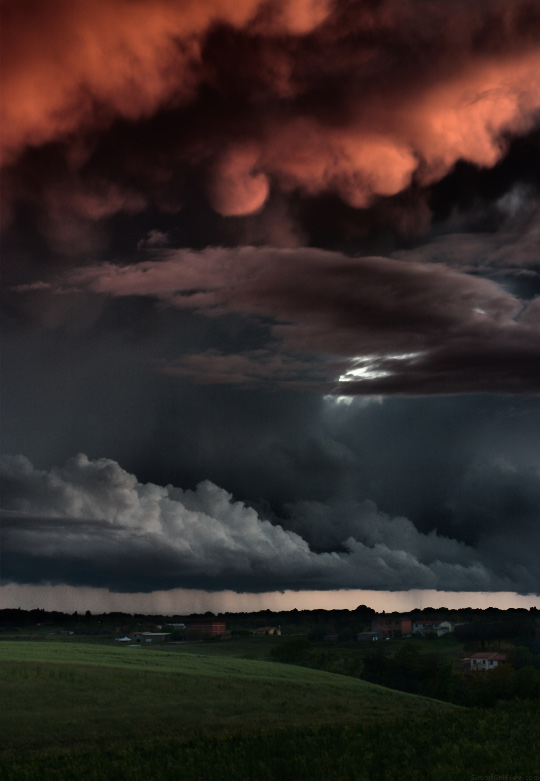 When I saw this on my way back home from work I stopped the car, got out and took several shots. It was a brief moment, the light from the setting sun on the layers of a fast-moving storm. A few minutes later, the cloud formations were gone.

The Myth of Talent

“So I made a decision in intensive care. I was not going back to an empty life lived half-awake. I was going to arrange my life, as much as possible around what I loved.” — Craig M. Tanner (At RadiantVista.com). 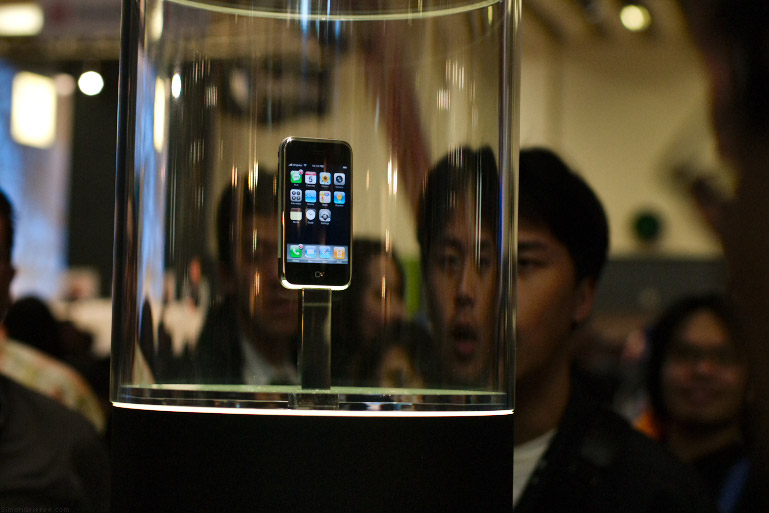 Alternate title: The lust for consumer electronics. Shot at the Macworld Exposition 2007. 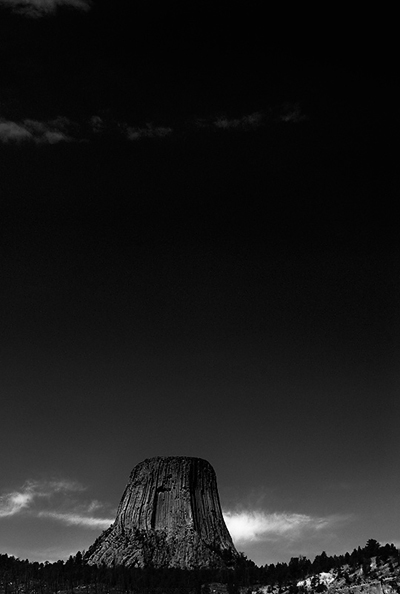 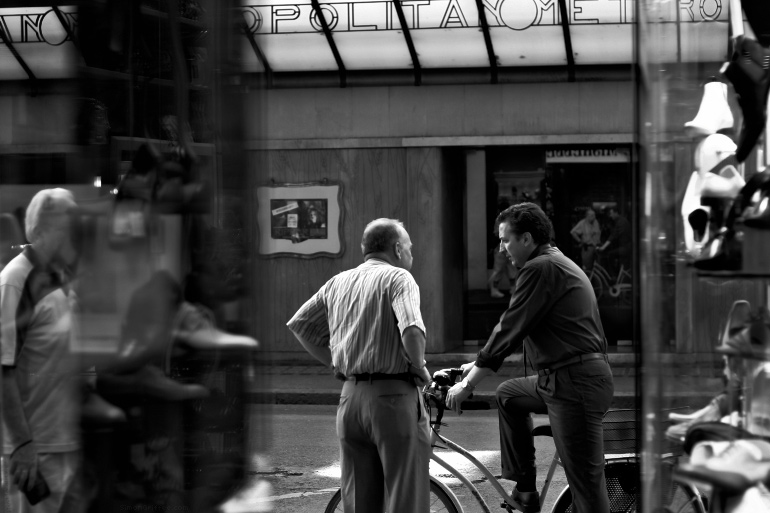 Afternoon chit-chat in front of Cinema Metropolitan at Via del Corso.

I once dropped a 35–200mm telephoto zoom in a canal in Venice whilst fumbling to change lenses. I tried snatching it when it slipped off my hand, but hit it instead, causing the lens to bounce off the balustrade and disappear into the depths. KABLUSCH

It was a relatively inexpensive lens, which came with the Canon kit my mum gave me for my birthday, but I did feel quite angry and stupid!

Here’s a video of somebody losing a slightly more expensive piece of equipment (YouTube - Astronaut Loses Camera in Space.). 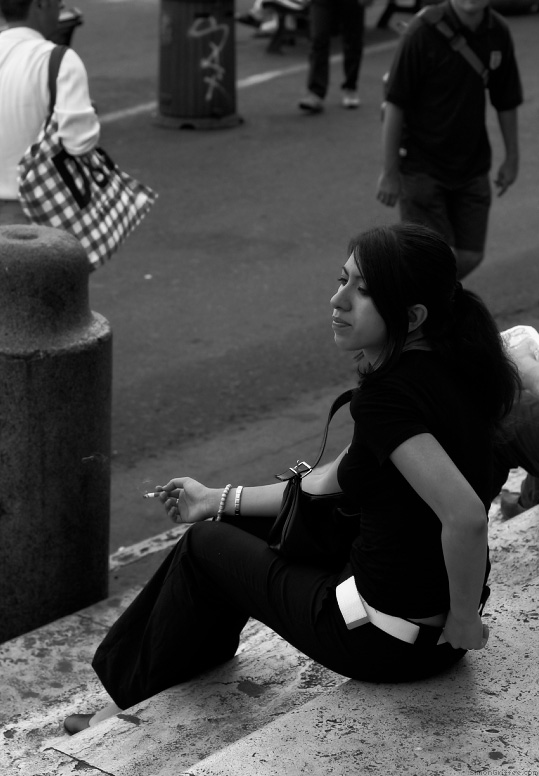 A Via del Corso.

LightZone (Lightcrafts website.) has a lovely, intuitive feel (The Thing about Intuition, by Fabio Riccardi.). It is the most exciting photographic development software I’ve used in a long time, and an important part of my workflow (SimonGriffee.com).

Yesterday I had the pleasure of meeting the LightZone team in Palo Alto. I like the faces behind the software, and encourage you to visit them at the Macworld Expo (Booth 3306.) if you’re in San Francisco next week. Booth 3306.

PS. I’m still in the process of deciding what to post where in DLog (Hypertexthero Design Log.) and this journal. In the meantime, there might be some cross-posts, such as this one (DLog - LightZone.). 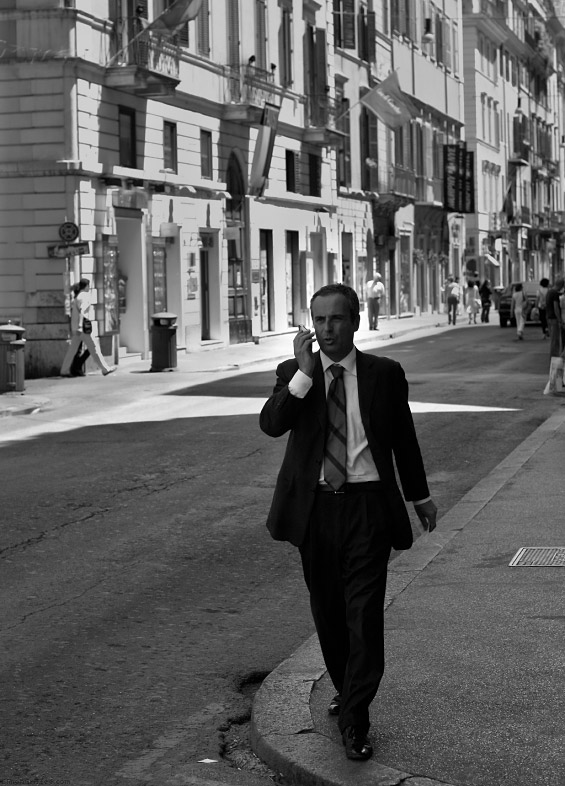 A Via del Corso. 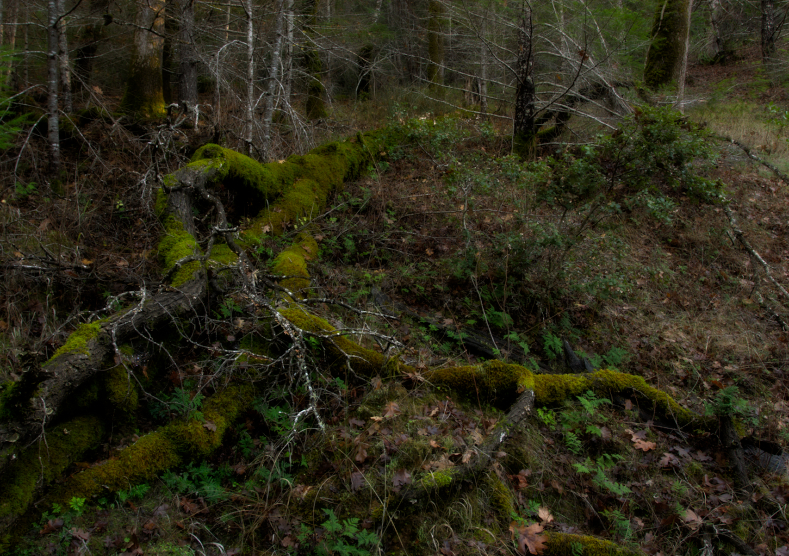 In a protected watershed near Yorkville.

The things we lose:

A good friend of mine just bought one of the Leica-clone point and shoots, the Panasonic one, 10mp, 16×9 format, it’s really nice. We were out on New Years and he said he really liked it but hated the red eye preflash. So we tried to figure out how to turn it off, two professional photographers, no luck, and then we tried to figure out how to fool it to turn it off. Can’t be done! So you miss the moment. I had my M6 and flash on it, f11, hyperfocal distance, 28mm lens. I didn’t even need to look through it or focus it, and it goes off instantly, exactly when you want it to. It really is a little bit like “shooting”.

I was watching some girls pose for a picture taken by a friend in the subway today, and there is that frozen expression, the waiting. This is new, used to be we all got fooled by the preflash, the red flash, etc, now we all know to wait for several seconds while it all goes on. Immediately after the pic (this is the pic that got away for me…) one of the girls instantly turned to bored, the effort of holding that smile. It was so artificial. 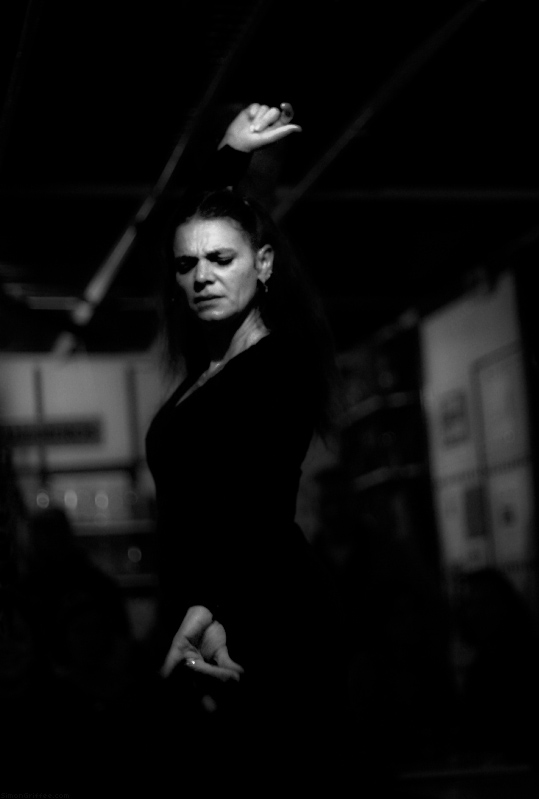 I’ve been using and enjoying the Mac OS X version of LightZone 2.0 (LightCraft.com - LightZone.) for a month now, and have a list of improvements and suggestions. I plan to keep this list updated. 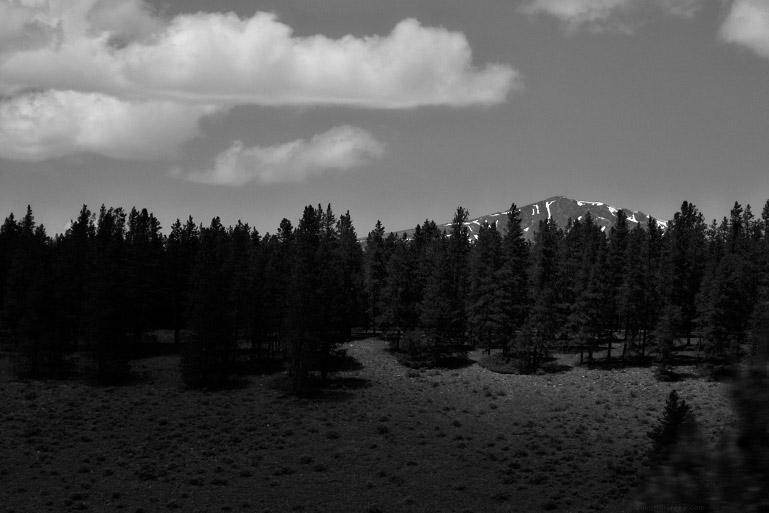 Looking at the Rocky Mountains out the car window. Near Leadville. 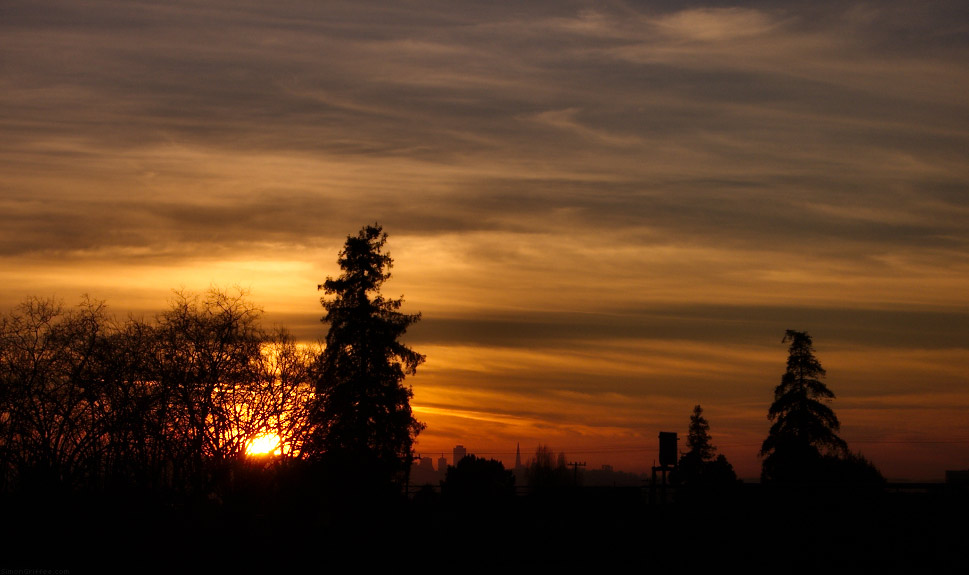 San Francisco skyline from Bushrod Park in North Oakland. The end of a hot day in the middle of winter. 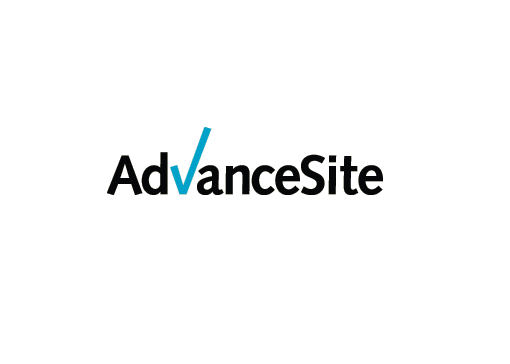 A web marketer was going into business for himself and needed a logotype.

I created the Advancesite logotype.