Computer games are probably the reason I work with computers.

It is said that Ken Thompson salvaged a PDP-1 and created a new operating system, now called UNIX, so that he could play SpaceWar.

I remember one of the first computer games I ever played was a version of the same on a 386 PC-XT at my friend Arthur’s1 house in São Paulo, Brazil. This was it! Here’s a screenshot: 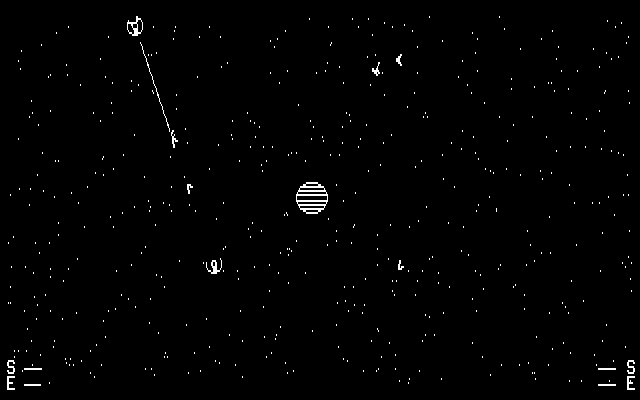 Computer graphics are now being extended into the area of play. There is a popular game, sometimes called Pong, which simulates on a television screen a perfectly elastic ball bouncing between two surfaces. Each player is given a dial that permits him to intercept the ball with a movable “racket.” Points are scored if the motion of the ball is not intercepted by the racket. The game is very interesting. There is a clear learning experience involved which depends exclusively on Newton’s second law for linear motion. As a result of Pong, the player can gain a deep intuitive understanding of the simplest Newtonian physics — a better understanding even than that provided by billiards, where the collisions are far from perfectly elastic and where the spinning of the pool balls interposes more complicated physics. This sort of information gathering is precisely what we call play. And the important function of play is thus revealed: it permits us to gain, without any particular future application in mind, a holistic understanding of the world, which is both a complement of and a preparation for later analytical activities. But computers permit play in environments otherwise totally inaccessible to the average student.

A still more interesting example is provided by the game Space War, whose development and delights have been chronicled by Stuart Brand. In Space War, each side controls one or more “space vehicles” which can fire missiles at the other. The motions of both the spacecraft and the missiles are governed by certain rules — for example, an inverse square gravitational field set up by a nearby “planet.” To destroy the spaceship of your opponent you must develop an understanding of Newtonian gravitation that is simultaneously intuitive and concrete. Those of us who do not frequently engage in interplanetary space flight do not readily evolve a right-hemisphere comprehension of Newtonian gravitation. Space War can fill that gap.

The two games, Pong and Space War, suggest a gradual elaboration of computer graphics so that we gain an experiential and intuitive understanding of the laws of physics. The laws of physics are almost always stated in analytical and algebraic — that is to say, left-hemisphere — terms; for example, Newton’s second law is written F = m a, and the inverse square law of gravitation as F = G M m/r2. These analytical representations are extremely useful, and it is certainly interesting that the universe is made in such a way that the motion of objects can be described by such relatively simple laws. But these laws are nothing more than abstractions from experience. Fundamentally they are mnemonic devices. They permit us to remember in a simple way a great range of cases that would individually be much more difficult to remember — at least in the sense of memory as understood by the left hemisphere. Computer graphics gives the prospective physical or biological scientist a wide range of experience with the cases his laws of nature summarize; but its most important function may be to permit those who are not scientists to grasp in an intuitive but nevertheless deep manner what the laws of nature are about.

There are many non-graphical interactive computer programs which are extremely powerful teaching tools. The programs can be devised by first-rate teachers, and the student has, in a curious sense, a much more personal, one-to-one relationship with the teacher than in the usual classroom setting; he may also be as slow as he wishes without fear of embarrassment. Dartmouth College employs computer learning techniques in a very broad array of courses. For example, a student can gain a deep insight into the statistics of Mendelian genetics in an hour with the computer rather than spend a year crossing fruit flies in the laboratory. Another student can examine the statistical likelihood of becoming pregnant were she to use various birth control methods. (This program has built into it a one-in-ten-billion chance of a woman’s becoming pregnant when strictly celibate, to allow for contingencies beyond present medical knowledge.)